This morning’s Daily Progress banner headline touts a letter sent by Supervisor Dennis Rooker on behalf of the self selected Jack Jouett Bypass Advisory Committee requesting an additional public hearing on the US 29 Western Bypass; a road that the a majority of the “Committee” members oppose.

This is a classic example of a vocal minority utilizing a Rope-A-Dope strategy to delay a popularly supported statewide transportation project.

The Rope-A-Dope boxing strategy was most famously used in the 1974 fight between Muhammad Ali and George Foreman, known as the Rumble in the Jungle.  In that fight, Foreman was favored due to superior punching power.  During the bout Ali taunted Foreman and withstood a firestorm of punches. 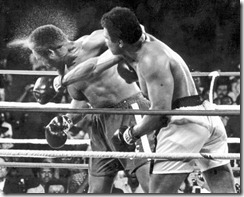 However, far from being brutalized, Ali was relatively protected from Foreman’s blows.  When Foreman became tired from the beating he was delivering, Ali regrouped and ended up winning the match.

Outside of boxing, rope-a-dope is used to describe strategies where one seems to be accepting a losing position (i.e. actually designing the US 29 Bypass) only to delay the action and eventually overturn it.

When considering this concept first the casual observer must ask why would the task force letter be sent now, dated April 24th.  If the Virginia Department of Transportation (VDOT) almost immediately accepted this request for a public hearing the “Committee” has specific demands regarding timing:

Even if VDOT had all of this information at its fingertips (which it does not), the soonest such a public hearing could be held would be June 1st.  But June will not work for Mr. Rooker’s “Jack Jouett Bypass Advisory Committee”.  Per the letter:

“We also request that the public hearing not be scheduled during June, July, or August since the community’s participation may be limited during these months due to vacations and community events.”

This is most interesting as Supervisor Rooker had no such issue in scheduling Albemarle County Board of Supervisors public hearings on the US 29 Bypass during the summer months last year, in fact, he strenuously advocated for such hearings.  The turnout at these summer meetings was strong with hundreds of attendees, banners, and leaflets.

To comply with Federal Highway Administration regulations, VDOT is conducting an assessment to determine whether previous federal approvals of the bypass are still valid. VDOT spokesman Lou Hatter said earlier this month that that process will consist of a citizen information meeting, but not a full public hearing at which comments would be entered into the public record.

“Members of the public will have the opportunity to provide comment during the citizen information meeting and during the draft environmental assessment review period,” Hatter said in an e-mail. “Public comment and questions have already been received through the two community task forces that looked at the northern and southern termini.”

Considering the turnout at last summer’s hearings, including one in Richmond, one can only surmise the true purpose of this  “Committee” request to postpone any proposed public hearing is yet another in a long string of delay tactics.

Charlottesville Tomorrow’s recent survey confirmed the results of the 2004 Citizen Survey conducted by the Free Enterprise Forum.  The public wants a US29 Bypass.  The opponents, while vocal, organized and well funded have not won the hearts and minds of the citizens.

To extend the boxing metaphor a touch further, the US 29 Western Bypass bout is clearly in the middle rounds and can still go either direction.  From this point, it looks like it will come down to the judges.

Neil Williamson is the President of The Free Enterprise Forum, a privately funded public policy organization covering the City of Charlottesville as well as Albemarle, Greene, Fluvanna, Louisa and  Nelson County.  For more information visit the website www.freeenterpriseforum.org