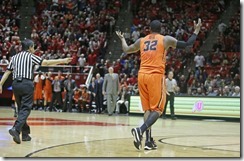 Imagine you are a college basketball player and in the final tournament game, the officials change the rules – calling fouls that usually would be ignored and ignoring others that would usually be called.

In addition, the basket automatically changes height dependent on which player is shooting and from where. There was no change at the rules committee, there was no open discussion amongst coaches – those charged with making the decisions just changed how they judged things – this is Albemarle County planning philosophy today.

Albemarle, in big ways and small, is changing the way they look at property where the Rural Areas and Development Area boundaries meet. The Comprehensive Plan, which is only a guideline, calls for density up to the edge of the development area (see below) but recent actions see that philosophical pillar being eroded.

In the Crozet master plan the land was designated for “3-6 dwelling units an acre” – the Adelaide proposal came in at 5.5 units an acre. (editor’s note the Free Enterprise Forum does not take positions on specific projects only policy thus had no position on this or any other application).

In her defense of her vote in opposition, Supervisor Ann Mallek wrote to the Crozet Gazette:

I stand behind my vote to deny Adelaide to uphold important features of the Crozet master plan … .The primary reasons for my vote were stated in the resolution I read as part of my motion to deny. Three supervisors thought the density was acceptable at the high end of the range. Three thought the density should be at the low end of the range. A 3-3 tie results in denial of the application.

Additional reasons for my vote:

Regarding the rural side of the line, earlier this year during a discussion of Farm Winery, Brewery and Distillery events, Supervisor Diantha McKeel said:

We’re looking at, in my district, on Hydraulic Road, in the middle of the urban ring.. an event center [winery] essentially an event center surrounded by 25,000 homes. It is in the rural area but in the urban ring.  The folks that live in the area are very patient with music from Albemarle High School, they love the band on Friday night – but to have something that brings in this type of traffic and noise and impacts without some restrictions is unnerving and I get that it is a little unusual place.

Perhaps none of the edges of the winery parcel can be outside of the rural area.

Albemarle County Attorney Greg Kamptner informed Randolph such a provision would be in violation of state law.

All of this discussion took place despite the explicit direction of Albemarle’s Comprehensive plan that calls for clear edges between development and rural areas.  Interestingly the very neighborhood McKeel discussed was called out in the plan

Visual clues are also helpful in identifying the Development Areas-Rural Area interface. Land use on 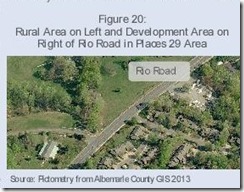 Transitions of large-lot subdivisions at the boundary are discouraged, as they are neither rural nor urban.They are too small for agricultural uses and muddy the edge. Emphasis added – nw

One easy solution would be to expand the development areas to encompass what McKeel calls the urban ring.  Dependent on the size of the expansion it could create, for a time, a buffer area of non conforming uses.

The larger core question revolves around the duality of two comprehensive plan land types, Development and Rural. A plurality of planners today see the world in a less binary reality.  The most popular planning philosophy of the day deals with the concept of “Transects” which is taken from the environmental sciences.

To systemize the analysis and coding of traditional patterns, a prototypical American rural-to-urban transect has been divided into six Transect Zones, or T-zones, for application on zoning maps. Standards were written for the first transect-based codes, eventually to become the SmartCode, which was released in 2003 by Duany Plater-Zyberk & Company.

A similar picture appears in Albemarle’s Comprehensive Plan.  Interesting question – where would you say the development area starts in the image above?  T-3?  T-4?

Based on recent actions, it is difficult to say where the Supervisors believe the Development areas begin and the rural areas end.

Once again we have more questions than answers, let March Madness begin.