Charlottesville’s Paid Parking ‘Canary in the Coal Mine’ ?

According to the Fairfax County Times, about five hundred people marched in protest on March 4th of the paid parking system implemented by Reston Town Center (RTC) owner and mana

Yesterday (3/13) The Washington Post ran an article titled End of Free Parking is the Last Straw for Some Reston Residents which highlighted business owners concerns:

But businesses in the Northern Virginia suburb, about 23 miles west of Washington, say there has been a noticeable drop in customer traffic since the fees took effect and parking enforcement officers began writing tickets.

Why should Charlottesville care about what is happening in Reston?

In the early 20th Century, coal miners used to take canaries into coal mines with them. Canaries are more sensitive to dangerous gases than humans are. As long as the bird was singing, the miners knew they were safe but if the canary stopped singing/died, the miners knew to evacuate.

RTC, much like Charlottesville’s Downtown Mall, was a long time in coming mixed use economic success.  Founded in 1990 (the same year Charlottesville removed parking meters), RTC is a new urbanist walkable development is surrounded by parking decks for customer/resident parking.  The retail mix within both properties is similar in type (banks, clothing, hotel and restaurants) if not specific brands.  An important distinction between the Downtown Mall and RTC is that RTC is privately held by a single entity and does not require governmental approval or significant public process to change parking regulations on their private property.

Parking, which in most of Northern Virginia’s shopping districts is ‘free’ has become an issue in both Charlottesville and Reston.

Boston Properties, which took over full ownership of the town center in 2015, had planned for years to implement fees for garage and curb spaces. In 2011, when it was moving to acquire town center parcels, the company estimated that the parking fees would generate as much as $8 million per year. Officials now say the amount will probably be lower… 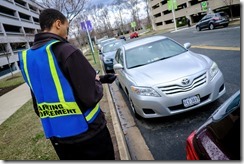 … Im Sun “Sunny” Park, owner of Obi Sushi restaurant, said sales have dropped by about a third since January. As she spoke, she watched a Boston Properties parking enforcement officer outside the restaurant leave a citation on the windshield of a car parked on the street.

“I see them giving tickets all day,” Park said. “They are killing business.”

A six-month test of parking meters around Charlottesville’s Downtown Mall could begin as early as August. Officials believe that if the project is successful, it will improve the chances of finding a parking spot near the mall.  “What we hope that it does is open up some of those spaces,” said Rick Siebert, hired last year as the city’s first parking manager. “What we’d like to do is have people drive down a block and actually see an open space.”…

The council also has authorized the establishment of an enterprise fund to support creation of the city parking department, which is overseen by Siebert. The department will be supported by revenue from parking garages, parking meters, fines and payments for permits required for special zones in the city.

It is interesting the different visions of free parking among those involved in the process.  One of the commenters to the Washington Post story (hockeymom1) wrote:

I live nearby and will not go to any of the retail or restaurants at Reston. Tysons, Mosaic and Dulles are free. Bethesda, which has less parking available and expensive land, charges quarter an hour! $2.00 an hour is insane! This article was good. I had not realized that once the developer had full control they wasted no time implementing fees!

On the other hand, perhaps not surprisingly since his new department will be funded by such fees, Charlottesville Tomorrow quoted Charlottesville’s Parking Manager:

“When you make something free, people don’t value it,” Siebert said. “People look for those spaces and they tend to camp out in them. Everyone’s heard of the two-hour shuffle, where people drive around the block after two hours looking for another space, adding to traffic congestion.”

“The goal with this plan is to alleviate existing issues and modernize parking on streets and in City-owned lots,” said City Engineer Mike Yeager. “The parking plan was created after working with the community to understand concerns about things like residents having a difficult time finding available on-street parking and businesses being affected by to the unrestricted parking times in front of their buildings.”

According to a January 17, 2017 article on Cincinnati.com the MainStrasse program fell swiftly on its face:

Under the parking program, the city charged for parking in MainStrasse for the first time in the history of the neighborhood. It also restricted many blocks to residential parking only.

But residents and businesses complained it made parking much more difficult. Parking kiosks didn’t work. Businesses lost customers. … The pay parking pushed cars into the residential areas not restricted by permits.

The city commission suspended the parking program indefinitely until the city can come up with a new parking plan.

The pay parking kiosks will be shuttered and the residential parking restrictions in MainStrasse lifted, Mayor Joe Meyer said.

While it is heartening to see Charlottesville position parking meters as a “pilot” and only a part of the parking solutions considered.

Available parking is the life’s blood of most small businesses.

The Free Enterprise Forum hopes the City Council will pay attention when the canary stops singing – local businesses (as well as the jobs and taxes they generate) will be at risk.

Only time will tell.