In private life, in order to be ‘engaged’ one person has to ask and another has to accept.   Things are not nearly as clear or complete in the public sector.

Charlottesville Planning Commission AND Housing Advisory Committee (HAC) are wrestling with the proper calibration of their independent public engagement efforts.  Hours of discussion and deliberation have been dedicated to not only with whom they engage but also the manner such engagement reaches (or fails to reach) underrepresented demographic targets.

For the Comprehensive Plan the Planning Commission has been using more traditional town hall style meetings and workshops, while almost concurrently the HAC is seeking City Council approval to spend ~$200,000 to conduct a much more involved public engagement process regarding their Housing Strategy Document. 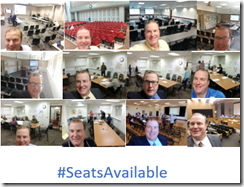 If you follow me on social media, you have seen my #SeatsAvailable posts from countless public meetings.

In the last year, there have been significantly more, and more diverse meeting attendees (especially in Charlottesville).  This is a good thing; but not everyone is coming to the meetings.

Much of the world of citizen engagement is now digital.  Released earlier today, the 2018 Granicus Benchmark Report analyzed 1.6 million emails, activity from 185 million citizen subscribers, and visitor behavior on over 400,000 web pages over a one-year period (June 2017– June 2018).

“In today’s data-rich environment, public sector communicators are turning to digital platforms that generate real-time performance metrics and deliver insights that can enhance their approach to citizen engagement,” said Granicus CEO Mark Hynes. “Measured across 4,000 organizations, the Granicus Benchmark Report provides industry metrics for engagement metrics so that communicators can iterate on the strategies that are working in the public sector. Better engagement translates into better outcomes for organizations and their priorities such as program adoption, participation in public meetings, or voter turnout.” 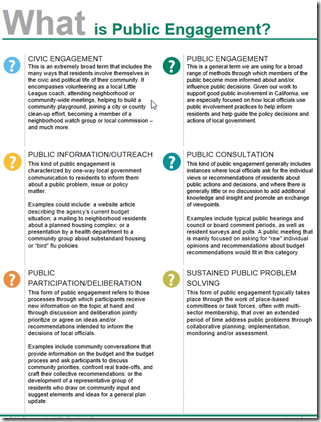 By defining the goal of the engagement helps determine which of these topographies best fit.

In my estimation, too often localities are in the public information /outreach mode, where they want to tell you what they are doing but are not truly listening to the response.

The other end of the spectrum is equally bad where elected (and appointed) officials are too fearful of the public response and seek to put a finger in the wind for every decision.  This is best represented in this chart by the sustained public problem solving.  In this case rather than leading, the elected officials are creating scapegoats to duck what statutorily is clearly their direct responsibility.

The Planning Commission has been working on community engagement with their Comprehensive plan work since early last year.  Starting in May 2017, the city held a series of community engagement workshops explaining the comprehensive plan process and seeking input from the public regarding the plan and the land use map.  The planning commission then held nine more public outreach sessions (July-August 2017) with more detailed maps and listening stations and a structured questionnaire.  After the initial public workshops, the commission took this public input and worked on adjusting the previous (2013) comprehensive plan with the new thoughts and concepts.

In May 2018, the commission held four identical public workshops in locations across the City. Last week, in a meeting with City Council, there was less than satisfaction regarding the level of public engagement with the plan especially with the low income community.  It was determined that an outreach document would be prepared to solicit feedback and some members of City Council (Wes Bellamy and perhaps others) would work to get that document created, printed, distributed, collected and collated in the next four weeks.

Meanwhile back at the ranch…..

Engagement is a critical part not only of the Charlottesville Planning Commission’s Comprehensive Plan work but also the Housing Advisory Committee’s (HAC) Affordable Housing Strategy.  City Council and HAC will meet tomorrow (8/30) to discuss their outreach efforts.  They explain the import of such engagement to the effort:

engagement
In Charlottesville’s history, the failure of institutions and city government to be accountable to low-wealth communities, particularly communities of color, has taken many forms: violent suppression, structural oppression, neglect, half-hearted or insincere attempts that serve to manufacture consent, and well-meaning attempts that end up failing due to their assumptions, framework, and processes favoring those in power and resulting in lopsided and inaccurate information, community inaction, or community harm.
Housing is at the root of historical structural inequity and oppression in the United States, and it came to be this way deliberately. As we build a strategy to achieve a local housing landscape that is healthy, ample, high quality, and affordable, we must be equally deliberate in dismantling the dynamics and the structures that perpetuate continued inequity—structures that often go unnoticed by those of us who benefit from them or don’t directly experience their harm.
To that end, rather than relying on the existing power structure to set the narrative and define the discussion, the community engagement strategy must leverage community relationships and expertise to genuinely engage our community. This methodology is vital to the project’s success and to the quality and legitimacy of the final Affordable Housing Strategy.

The scope of the HAC public engagement plan is significantly more robust, active and expensive ($200,019) than the Planning Commission’s efforts.  The objective of this data collection is made clear in the HAC proposal:

The city will engage with a consultant to plan and execute the community engagement process, which includes community outreach and response, training of citizen-interns to engage peer-to-peer conversations within their communities, data collection, data analysis, information delivery, and stewardship. The consultant will be an advocate for eliciting, amplifying, and accurately reporting resident voices. . .

[scope of work includes]  . . . Design a community engagement process that will engage the most citizens in the most personal and most meaningful ways possible. The emphasis will be on proactively connecting and engaging with low-income residents, people of color, and others traditionally underserved, underrepresented, and/or overshadowed by citizens who are more vocal, affluent, politically involved, and deferred to.

Methods and activities could include the following:

The Institute for Local Government describes three orientations of local government public engagement: Passive, Active or Sustaining.  Their experience (and ours) indicates that most local efforts to engage the public are one time events focused on one time issues a roadway (Bypass), climate provision, school budget, etc.  They advocate localities need to move toward a more sustained public engagement  and “embed” a capacity beyond these “one and done” efforts.

the benefits of sustained, effective and inclusive public engagement are significant. They include: better identification of the public’s values and ideas; more informed residents; improved local agency decision making and actions; and more public trust and confidence in local government.

In reviewing the Housing Advisory Committee Housing Strategy document, we believe this is significant outreach effort but wonder if such engagement is designed to be sustained.  Perhaps the HAC is seeing this as a pilot and if successful it could be easily reconstituted with the already trained peer-to-peer networks.

The Free Enterprise Forum does not take positions on budget line items such as the $200K HAC engagement plan. That is a value judgement for City Council to make.

We firmly believe that outreach opportunities should be provided to all citizens.

We also believe public engagement requires willingness to engage from all involved.  We are concerned that a lack of a specific, requested, action may be used to prove “The City is not listening”.

We also know, we are a representative democracy and that requires leadership not governing by survey/poll data.

You’ll never have all the information you need to make a decision. If you did, it would be a foregone conclusion, not a decision.–David Mahoney Jr.

There is a time to listen and a time to lead, we hope Charlottesville’s leaders are able to discern the difference.