Dissecting A Decade of Data

Did you ever have a question gnaw at you?

Earlier this month, I attended the Charlottesville Area Association of REALTORS® Development Summit.  A panel of area developers were discussing Charlottesville Regional Chamber of Commerce’s recently released 2018 Jobs Report and attempted to correlate how job creation related to the local housing market.  Absent any specific data, the panel inferred the new jobs in the region clearly were one (not the only) driver of housing demand.

Much like Timothy Hulbert’s inspiration for the first Chamber “Jobs Report” fifteen years ago, I knew this data set could be assembled and I set out to obtain this objective new housing unit data.

Reaching out to each of the localities (two required Freedom of Information Act (FOIA)Requests) we assembled the new housing unit data (2007-2017) and compared it on a locality basis the Jobs report data for the same study period.

We then compiled this data on a regional basis and found (or perhaps did not find) a most interesting correlation and perhaps an impending tipping point.

This line of inquiry led to considering the other significant impacts on the housing industry beyond Jobs.  The enrollment at the University of Virginia for instance increased by 2,408 students from 2007-2017.  Regionally the population increased by 30,633 persons.  Overlaying The Weldon Cooper Center’s population estimates with our other gathered data started to prove the population demand driver. 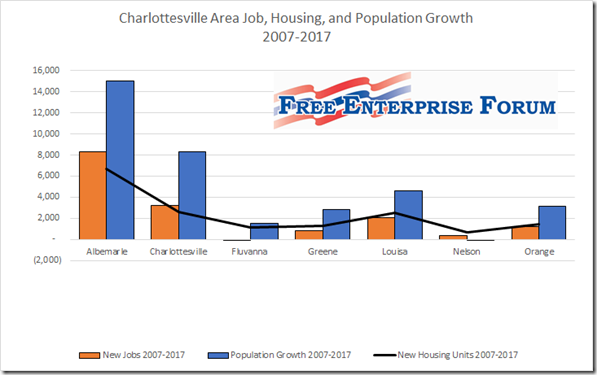 Examining the introduction of the population trend line leads to a number of new questions:

Dissecting this decade of data (2007-2017), we again end up with more questions than answers.

But often, the best questions drive the best community discussion.